A barkeeper and Rindo Urushiba's friend, Cayce, appears identically to Steven Seagal. His name is a reference to Casey Ryback, the name of Seagal's character in the Under Seige film series.

Under his panda suit Roshi Yodani's appearance is identical to that of the homonymous character from Star Wars series. The only difference is the colour of their skin.

Torada is based off Charlie Wax, a character that potrayed by John Travolta from the movie From Paris With Love.

Andou Garcia's character design is practically identical to that of Jack Cayman from the games MadWorld and Anarchy Reigns.

Hanao Chiaki's face heavily reminds that of the horror icon Chucky from the movie Child's Play, as even her surname suggest it.

Green Lantern has also been parodied in the series. An esper who was captured by Nadja Koroshinskii and brought to the underground arena, was given a mask and costume that resemble to Green Lantern.

Rhadamanthus as the Engineer

Rhadamanthus resembles the Engineer from the movie Prometheus.

The Ghostbusters also make a cameo appearance in episode 3 of the anime. 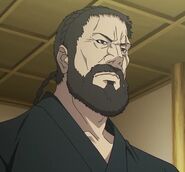 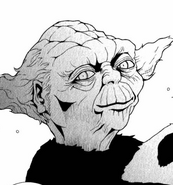 Torada as Charlie Wax (John Travolta).
Add a photo to this gallery
Retrieved from "https://tokyoesp.fandom.com/wiki/Cameos?oldid=5582"
Community content is available under CC-BY-SA unless otherwise noted.